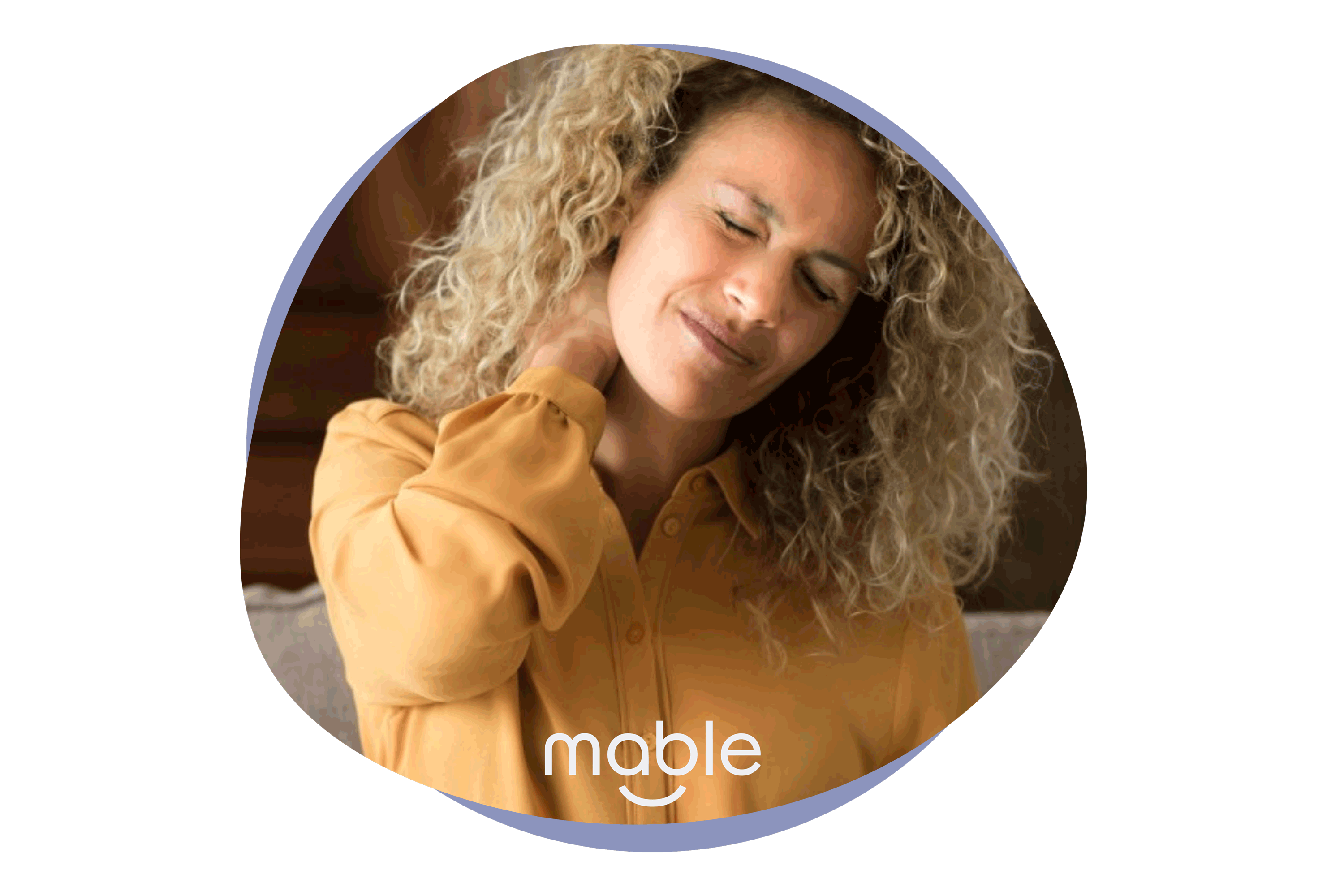 Migraine is a condition that affects many people but is often misunderstood. Far more than just a “bad headache,” migraines can be debilitating for those who live with it. According to the American Migraine Foundation, at least 39 million people in the United States live with migraines, but the number is probably much higher since the condition can frequently be undiagnosed.

It can be challenging for people who don’t experience migraines to understand what they are like. “Migraine is one of the largest causes of disability in the world,” says Kumeren Govender, MD, Ph.D., Chief Medical Officer of Mable and a founding member of the company.

What are Migraine Symptoms?

In contrast to other types of headache, such as tension headache, migraine pain almost always tends to be severe. “Patients may differ because everyone’s unique. It’s generally a severe headache, particularly on one side out of the head,” Dr. Govender says. “Nausea and vomiting are quite common when people suffer from migraine, and people also tend to be photophobic.” That means they will want to move away from bright lights, and in addition, they may want to be away from loud noises. Physical activity often makes the head pain worse. We know this period as the “attack” stage of a migraine.

But one or two days before an attack occurs, people with the condition may also notice warning signs that a migraine is coming. We know this period as “prodrome.” These symptoms might include:

Either before or during a migraine, people may also experience what’s called an aura. These are nervous-system disturbances that begin gradually and then build up, lasting up to an hour. Symptoms can include vision loss, seeing various bright spots, flashes of light or shapes; weakness or numbness in the face or on one side of the body; trouble talking; or sensations like pins and needles in an arm or leg. While an aura can be alarming to experience, it isn’t physically harmful.

The period after a migraine is called post-drome. During this time, a person may feel drained and worn out for a day.

Going through such an intense, disabling process makes it difficult for people with migraines to do everyday activities such as going to work, taking care of children, and more.

The causes of migraines, to date, are not well understood. “It’s quite a complicated diagnosis because it’s one of those conditions that have a genetic component, but also have an environmental component,” Govender says.

What is known is that migraine tends to affect women more than it does men. While migraines can affect people of any background, race, gender, or sex, over two-thirds of people who have migraine are women, according to Govender. While hormones may be to blame partly for this, they aren’t the entire story. “And even if it wasn’t hormonal, there still seems to be a predilection towards women,” Govender says. “That may be because of some genetic factors as well, but hormones for sure play a huge role.” A genetic study from 2021 of over 100,000 people with migraines identified 123 different risk loci, or genetic characteristics, for the condition, and researchers are working to recognize even more.

Migraines are thought to be caused by a spreading wave of abnormal electrical activity in the brain, a theory called “cortical spreading depression,” which stimulates pain-sensitive nerve cells. According to Johns Hopkins Medicine, women also have higher levels of a chemical called estrogen, particularly during their childbearing years (from the onset of menstruation in their teens until menopause, typically in their early 50s). When estrogen or serotonin levels change, the result for some people is a migraine. And while serotonin levels affect both men and women, estrogen fluctuations only affect women. Other neurotransmitters also play a role in migraines, such as calcitonin gene-related peptide (CGRP).

What Triggers a Migraine?

Triggers are not the cause of a migraine, but increase the probability of experiencing one in people with a predisposition to the condition. Many factors can trigger migraines, and it’s also important to remember that it isn’t your fault for getting a migraine. The migraine can also come on unpredictably. According to the Migraine Trust, genetics are up to 60 percent responsible for migraines.

Triggers will be different for everyone who has migraines. Some of the common ones include:

Why are Migraines Often Misdiagnosed or Undiagnosed?

Despite the acute disease burden, only half of the people with migraine are diagnosed with the condition. One of the main reasons for this is that 80 percent of people with migraine are seen in a primary care setting, not by a headache specialist. “There’s a system failure to educate [primary care] doctors about migraine—they don’t know how to actually diagnose it correctly,” says Roman Rothaermel, Ph.D., Neuroscientist and Chief Executive Officer of Mable.

One of the biggest challenges for a primary care physician (PCP) to diagnose migraine is that chronic headaches can be caused by many conditions, including high blood pressure or muscle tension in the jaw and neck.

Migraine can also be a challenge to diagnose because there isn’t a specific diagnostic tool to test for it. Instead, a doctor makes a diagnosis by taking your medical history and ruling out other causes for your migraine attacks. Your doctor will probably ask you for the details of your head pain, such as when it started, how often you get it, how severe it is, and how it impacts your daily life. They will ask about your family history of migraine and what treatments you’ve tried in the past.

A primary care physician (PCP) will do some quick neurological tests to check your reflexes, and they may test your short-term memory. Your doctor will check your head, neck, and shoulders, and they will also check your blood pressure and pulse. A PCP may find this to be enough information to diagnose you with a migraine if you’ve had at least five headaches with migraine characteristics.

A PCP may sometimes want to refer you to a neurologist for a neurological assessment. This can be done using a computed tomography (CT) scan or magnetic resonance imaging (MRI) to take a picture of your brain. While this can rule out other reasons for your headache, like tumors, it can’t diagnose migraine.

An Accurate Diagnosis is Essential

But getting an accurate diagnosis is essential. If you aren’t diagnosed, you may waste valuable time taking medication for other forms of headache, such as tension headache, that will not work for you.

The toll of chronic, undiagnosed migraine can be severe: It’s common for people with migraine to have other health conditions as well. These can include mood disorders like depression, anxiety, and post-traumatic stress disorder (PTSD). In people with chronic migraine (defined as 15 or more days per month with migraine), 59 percent experienced moderate-to-severe depression, according to an April 2021 study published in the journal Headache. Anxiety can also be quite common.

Several physical conditions can go along with migraine as well. These can include chronic fatigue, fibromyalgia, other pain conditions, sleep disorders, chronic obstructive pulmonary disease (COPD), and digestive issues like irritable bowel syndrome and Crohn’s disease. Researchers think that these related health conditions—known as comorbidities—may have an underlying genetic component that makes people with migraine more susceptible to them.

Getting an accurate diagnosis of migraine is vital to help treat both the headaches and any other health conditions that you may have along with them, so you can be on medications that will work safely for each and help you be your healthiest.

How to Obtain a More Accurate Migraine Diagnosis

If you are getting regular, persistent headaches—or new daily headaches—that you think could be migraine attacks. It’s time to take action so you can find the relief you need and improve your quality of life. Go to the Mable's quiz to see if your symptoms point to migraines or a different type of headache.

If you are already diagnosed with migraine, this quiz helps you find a suitable treatment for you.

Photo by Anthony Tran on Unsplash.

6.      American Migraine Foundation, “Top 10 Migraine Triggers and How to Deal with Them.” https://americanmigrainefoundation.org/resource-library/top-10-migraine-triggers/

At Mable, we are committed to providing every individual with clear, credible, evidence-based health and wellness information. To be your most trusted source of information, our content is medically reviewed to verify the clinical accuracy of our content, images, products, and services. Medical review is provided by members of our team. Our team brings an extensive experience from across the spectrum of medical specialties, as well as their perspective from years of clinical practice, research, and patient advocacy.
Written by
Roman Rothaermel
No items found.