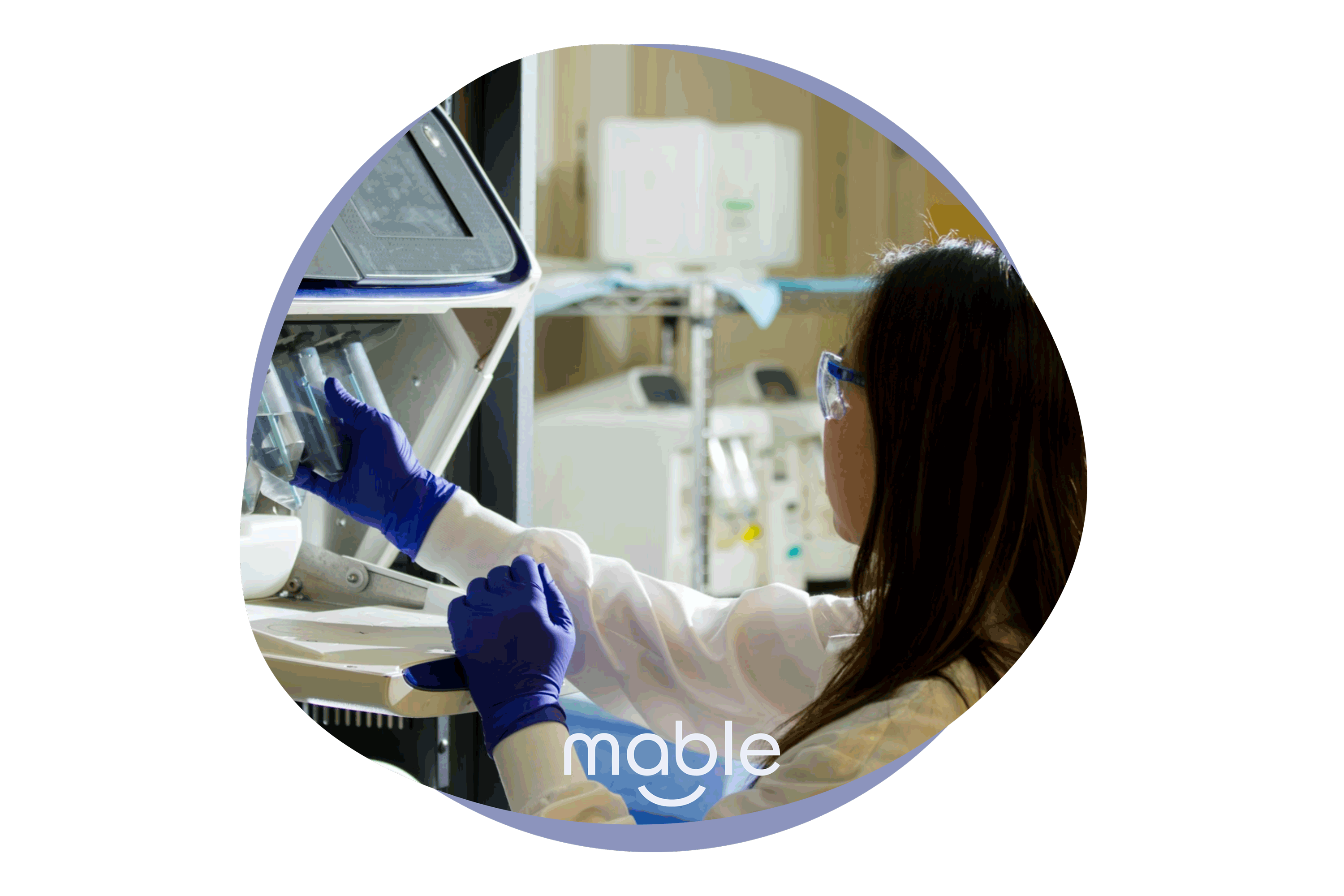 Many people wonder, are migraines genetic? For many people who suffer from migraine, the condition can profoundly affect their everyday lives. Migraine pain can make it hard to perform at work or school, or when you're feeling sensitive to noise and light, you may bow out of spending time with others.

It's only reasonable to wonder what, exactly, causes your migraine to begin with. “People want to know why they have migraine, and what they can do to fix them,” says Professor Carolyn Bernstein, MD, FAHS, a neurologist who specializes in headache medicine at Osher Center for Integrative Medicine at Harvard Medical School and Brigham and Women's Hospital in Boston. Dr. Bernstein also advises Mable and is involved in the development of Mable's products.

If you have migraine, it’s possible that you also have family members who get them. Scientists have long noted this connection, even before our more sophisticated, current understanding of genetics. “Yes, migraines can be heritable, and you can determine this from twin or family studies—even without looking at DNA,” says Chris Eijsbouts, Chief Science Officer at Mable and a doctoral researcher from the University of Oxford in England.

A 2016 study published in the journal Nature Genetics found that when looking at 375,000 people who suffered migraine, 42 percent had family members with the condition. But it also noted that studies at that time had found little about the specifics of these genes. “There are really not any good tools to help people understand why they have migraine,” says Bernstein.

In genetics, researchers look for genetic biomarkers. Biomarkers can help determine if a person has inherited genetic mutation, making a person more likely to develop a specific health condition. Biomarkers can be loci, which are fixed positions on a chromosome where a specific genetic marker is. These loci produce particular traits, such as hair or eye color—and there are also loci associated with migraine. A genetic study from 2021 of over 100,000 people with migraine identified 123 different risk loci for the condition.

Many genetic factors can influence migraine. But it may not be clear how much these genetics have to do with your overall chance of developing migraine. “Genetic factors are responsible for about 40 percent of the variance in measures of whether or not people have migraine,” says Eijsbouts.

“However, because of methodological limitations, the proportion of variance we can explain from looking at your genetic data is actually lower.” That means there are still a lot of unanswered questions about the genetics of migraine, even for the identified gene mutations. Still, using current methods, “We can predict (a part of) migraine predisposition just by looking at your DNA,” Eijsbouts adds.

Migraine is Not Your Fault

It’s important to know that migraine are not your fault. “Migraine isn’t something that you bring on yourself,” says Bernstein. There can often be much emphasis on what triggers migraine and how to avoid these triggers. Triggers are different for each person with migraine, but some of the most common ones are emotional stress, skipping a meal, caffeine, changes in sleep, and hormonal fluctuations in women before or during their period.

And while it’s good to be aware of your triggers and manage them as best you can, triggers and causes are not the same things. Instead, migraine are caused by several factors, both environmental and genetic. And though these genetic components have not been well understood in the past, Mable is at the forefront of advancements in this field and how to apply these findings for better, faster, more effective migraine treatment.

Is Response to Migraine Drugs Inherited, Too?

One of the major challenges with migraine treatment, as they commonly practice it, is that prescribers don’t understand who will react well to which treatments. They often prescribe people with moderate or severe migraine preventive medications to reduce the frequency and severity of their headaches.

There are a lot of different drugs used to treat migraine. "The next question for a doctor after 'What's causing my migraine' is, 'Why are you picking these specific treatments for me?'" says Bernstein. Although she is one of the foremost migraine experts in the United States with decades of experience and expertise, "I can't necessarily promise that a particular treatment is going to work for you," Bernstein says. This is true even of newer drugs targeted to migraine pain receptors and older systemic painkillers like NSAIDs that affect the whole body.

Predicting Your Body's Response to Medication

While there have not been good predictors in the past of who will respond well to different treatments, this is part of what makes the work Mable is doing so different—and exciting. "When we capture predictors of how a person may respond to a treatment, that leads to more informed treatment," Bernstein says.

It's also more in line with what doctors strive for in modern medicine: to have shared decision-making with their patients. While before a doctor may have sent you off with a migraine medication without asking you how you felt about trying that drug or explaining why they prescribed it, now, having a better understanding of the genetic factors influencing your migraine and how you're likely to respond to treatment can help you feel like your doctor's recommendations make sense, and that you're more informed about your unique experience with migraine.

Eijsbouts notes that people can have very different reactions to different drugs—and that genetic research bears this out. “While the effects of genetic variants on many diseases are relatively subtle, the effects of genetic variants on drug response tend to be more pronounced,” he says. Although genetic studies focus more on diseases themselves, some look at responses to drugs. Mable is doing this by collecting comprehensive genetic data and combining it with data about drug responses.

Studies of other chronic health conditions have shown how genetic variants can respond to different drugs. Eijsbouts cites a 2021 study on the use of antidepressants to treat depression, which found that antidepressant response is influenced by common genetic variation, which could be helpful in future research.

But as with migraine, people with depression or anxiety are often told they need to try a medication for three months to determine if it will work for them or not—which is a long time to be on a drug if it will not help. There are now genetic tests available to help people with depression narrow down their antidepressant options, helping them find a treatment that’s more likely to help them sooner, and cutting down on the trial-and-error aspect of establishing effective treatment.

And a 2020 study in the journal Translational Psychiatry found that in people with schizophrenia who were prescribed the antipsychotic drug clozapine, researchers could see certain patterns of genetic variation that help identify who would develop myocarditis (inflammation of the heart muscle)—a rare, potentially life-threatening complication for a small number of people who take the medication. Researchers hope to use this information to prevent giving the drug to people who have this genetic association in the future.

Can a DNA Test Help with My Migraines?

Currently, migraine treatment can be a frustrating endeavor for both the person with the migraine and for their doctor.

According to the Migraine Research Foundation, migraine affects 39 million adults and children in the United States—that's 12 percent of the population. But despite its prevalence, there are only 580 migraine specialists in the country, according to Bernstein, who says her migraine patients have a 9-month wait to see her, even though she works in one of the biggest headache centers in the country.

Most people living with migraine don't have access to timely care from a professional with expertise in the condition. In fact, most people with migraine are seen and treated by their primary care physician (PCP), who likely has a broad range of knowledge about many health conditions, but frequently does not have much familiarity with diagnosing and treating migraine.

Bernstein is teaching a group of doctoral residents to specialize in migraine and says, "What I'm discovering is that they get very little education [about migraine], and many of them have told me how much fun it is to actually learn what to do and how to do it." PCPs may default to putting anyone with migraine into a standard treatment like amitriptyline without knowing if the drug is a practical choice for that person.

Despite being standard in other fields of medicine, biomarkers are currently not being used in migraine care at all. But DNA tests can potentially change the way migraine are treated from the onset. First, they can provide a patient with valuable information about the genetic causes of their migraine. Most importantly, DNA tests will help a person know which type of treatment is most likely to ease their migraine, so they don’t have to waste valuable months trying medications that will not work for them while suffering and returning to the doctor.

How is Mable Unique in Managing Migraine?

With Mable’s proprietary DNA test, researchers like Eijsbouts can now identify far more genetic variants tied to migraine than previously known. This means it can help more people with migraine with a DNA test, and the results can be a lot more specific. “The fact that we collect a broader range of data will allow us to learn the effects of additional genetic variants on drug response, and also to act on variants that studies by other groups identify as being relevant in drug response,” he says. “We can feed this information back to Mable members.”

This precise, tailored treatment is known as “precision medicine.” And it hasn’t been available to migraine patients in the past, despite how common the condition is and how ineffective treatment can be.

Mable also helps provide this more personalized form of treatment to many more people with migraine, so they don’t need to wait months to see a headache specialist who may not live in their area or be seen multiple times by a PCP because their treatment isn’t working. Mable provides telehealth for people with migraine to easily access a doctor who can review their DNA results and prescribe medication that is far more likely to provide relief more quickly. Patients can keep working with a Mable migraine specialist throughout their care or transfer their care back to a PCP or other doctor once treatment has been established.

Are you ready to take control of your migraine? See if you're a fit for DNA-informed Migraine Care‍

At Mable, we are committed to providing every individual with clear, credible, evidence-based health and wellness information. To be your most trusted source of information, our content is medically reviewed to verify the clinical accuracy of our content, images, products, and services. Medical review is provided by members of our team. Our team brings an extensive experience from across the spectrum of medical specialties, as well as their perspective from years of clinical practice, research, and patient advocacy.
Written by
Roman Rothaermel
No items found.